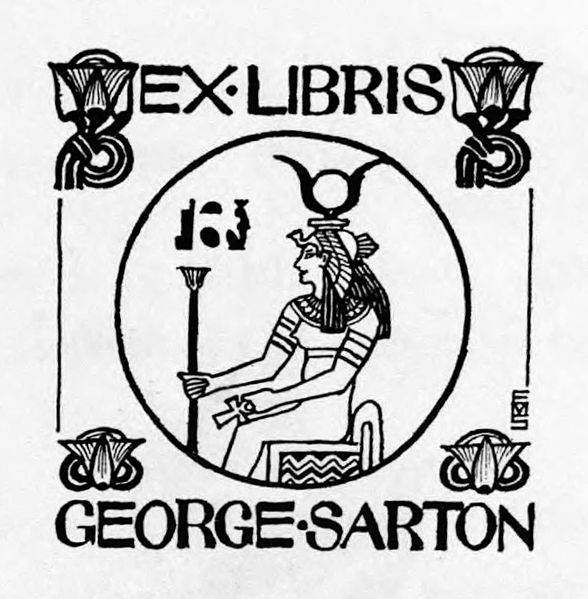 The acknowledgement of the benefit that would be bestowed upon a man of letters were he to have both humanistic and exact (and experimental) education is the background of George Sarton’s Science and Style (1921). Rereading that piece was by no means an ordinary experience: the views of Sarton are perhaps my own views, notwithstanding the fact of his being able to express them with real style. My first textual encounter with him was on an old book on the history of science whose title I just cannot recall. The historian would spell out some facts about this Belgian chemist who decided to write a lengthy volume, in fact three tomes, on the history of science; but who during the drafting of the second volume (as Wikipedia tells me again) had the brilliant idea of learning Arabic so that he could first of all read the relevant manuscripts of Islamic scientists. At the time I learned of the existence of Sarton I was able to find just one piece of his writing, which is the said article. But I too put the old book away and called my young friend, David – who at 15 could speak Arabic, having learned it for no reason at all – to ask for Arabic classes. My enthusiasm for Arabic would come and go (so that today I have no knowledge of it), and I also forgot about the existence of Sarton. Yesterday I found a link to his Science and Style in a Brazilian blog. Having commented upon it on Facebook, a friend of mine, Rodrigo de Lemos, pointed out curious similarities between Sarton’s article and Paul Valéry’s Introduction a la méthode de Léonard de Vinci, which I’m reading now and intend to comment upon shortly. Both of them, by the way, are Leonardo Da Vinci enthusiasts.

One of the main points of Sarton’s piece is the often boisterous love-hate relationship between originality and tradition (a point which in some ways echoes Eliotian themes), the former the ‘spark of genius’ and the latter the ‘quintessence of centuries of labor and criticism’. It is a good point. We often galvanize nostalgia for past ages with our praise of tempori acti, or either debunk the old and embrace the new wave for the new wave’ sake, usually with shenanigans. Moderation, here equated to skepticism, is a terrible thing to taste, for we are everlastingly prone to believe. Perhaps art has nothing to do with balance or moderation simpliciter, being a simultaneous embracing of extreme originality and extreme subjection to tradition – a Borgean “future-to-the-past” reenacting of Taleb’s both conservative and aggressive, Black Swan surfer, global investment style.

But his general insight is more of a practical nature. He points out that good teaching of science is implicitly a teaching of style. Science’s style, that obstinate rigour, Da Vinci’s motto, would perhaps discourage many literary efforts, but in the end that reduction would be likely to affect only mediocre literature, which is a positive gain according to him. The dearth of style plus plenty of writing which characterizes 20th century modernism (he means the average joes of the world of letters) would only be effectively cast out if such a ‘cleansing reduction’ were to take place. “The opening up of fresh resources of inspiration would give an enormous impetus to the activity of the most gifted. I dare say, also, that of two men having equal artistic abilities, the one commanding more knowledge will reach a far higher level of style.” And then he goes on to speak of a “Pascalian beauty, which is found only in the writings of those who were at the same time great scientists and great artists”, “all-round humanists able to appreciate the beauty of science as well as the beauty of art, and to understand nature as well as man. Such complete humanists have existed in the past; there is no reason why they should not thrive again in the future, though their appearance will hardly be possible without a profound transformation of the present courses of study”.

This has a Renaissance grip to it and is something of an audacious move on his part. Nevertheless, we have not indeed seen much of the Pascalian beauty Sarton wrote about in the past century, nor it is likely that we will see it in the near future — unless a Black Swan event is to break into the arts and science abbey. We seem to have incorporated specialization as if it were some kind of code written deep somewhere on our way of knowing things. We just do not seem to be able to deal in a working and precise way with generality (and thank god we still abhor theories of everything). Like Arabic, it may be one of those things which are truly hard to understand, but which are worth giving some thought to.

3 comentários em “A Note on Science and Style”